ARLINGTON, Texas ⁠— The Texas Rangers will host the Philadelphia Phillies in the 2023 regular season opener at Globe Life Field on Thursday, March 30. The complete 2023 schedule was announced today by Major League Baseball.

This will be the 30th time in 52 seasons that the Rangers have opened at home, the sixth occasion in the last eight years. It will mark the second time the Rangers have played the Phillies on opening day as the club dropped a 14-10 decision on March 31, 2014 at Globe Life Park in Arlington. Texas has played a National League team in its first game of the season on three previous occasions, all at home, the others being 2019 vs. the Chicago Cubs at Globe Life Field (L, 4-12) and 2020 against Colorado in the first regular season game at Globe Life Field (W, 1-0).

Following the three-game Philadelphia series, March 31-April 2, the Rangers conclude the season opening homestand with a three-game set against the Baltimore Orioles, April 3-5. Texas will play 18 of its first 30 games at home through May 3.

In 2023 Major League Baseball will feature a balanced schedule for all 30 clubs for the first time since interleague play was introduced in 1997. As a result, the Rangers’ 2023 schedule will feature the following: 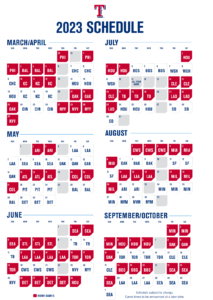 Division Games: 52 total games (26 at home and 26 on the road) against four A.L. West Division opponents (decreased from 76). That will include 13 games each versus Houston, Los Angeles Angels, Oakland, and Seattle.

Intraleague Games: 64 total games (32 at home and 32 on the road) against the other ten American League teams (decreased from 66). The Rangers will play seven games each against Detroit, Minnesota, New York Yankees, and Toronto and six games apiece versus Baltimore, Boston, Chicago White Sox, Cleveland, Kansas City, and Tampa Bay.

Interleague Games: 46 total games (23 games at home and 23 on the road) against the 15 National League teams (increased from 20). Texas will meet Arizona four times in a pair of home and home two-game series and the remaining 14 NL clubs three times each. The Rangers will host three-game series with Atlanta, Colorado, Los Angeles Dodgers, Miami, Milwaukee, Philadelphia, and St. Louis and play three-game road sets at Chicago Cubs, Cincinnati, New York Mets, Pittsburgh, San Diego, San Francisco, and Washington. It will be the first time the Brewers have played in Arlington since 2016.

Texas closes the 2023 regular season with a seven-game roadtrip to the Los Angeles Angels and Seattle, September 25-October 1.

Game times for the 2023 schedule will be announced at a later date.