Ebarb had a combined three hits, and pitched in relief as the Rabbits blanked Queen City, 10-0, and DeKalb, 12-0. The Tigers had a bad week, losing twice to Lindale. Prior to those games Smith had a home run and two singles in Texas High’s 17-3 win over Mount Pleasant. Smith was also the Tigers’ leading hitter last Friday night against Lindale with two singles. 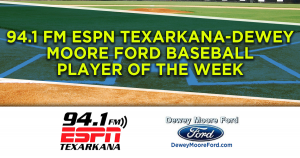 Witterstaetter’s nine-inning gem last Friday night against Pittsburg earned the Leopards their playoff berth since 2011. The crafty right-hander shut out the Pirates, 1-0. He only struck out three, but two came in the seventh inning after a leadoff double.